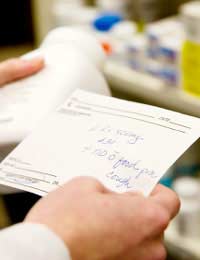 Controversy has surrounded the decisions made by the National Institute for Clinical Excellence (NICE) since it was set up in 2000. This government body is responsible for making decisions about which drugs will become available on the National Health Service for people in England and Wales.

Although treatment in the NHS is free to everyone, the service itself has budget constraints and one of the ways that spending is controlled is to fund drugs that are considered cost effective. The way that NICE decides this is complicated but, in general, a drug to treat cancer that extends life by months rather than weeks and that costs about the same as standard treatments were normally be passed as OK. However, if the improvements in survival are smaller, or the drug is very much more expensive than currently used drugs, NICE can reject them.

The process by which NICE makes such decisions has been criticised and it puts the UK behind other countries in Europe in terms of patient access to new drugs. This is particularly true in cancer, where the drugs being developed and approved are very expensive because of the large trials that are needed to prove they are safe. The UK has fallen behind countries such as Sweden, Germany and France where access to new drugs is granted much more quickly. This is thought to be one reason why cancer survival rates are lower in the UK than elsewhere in Europe.

That may seem fair on the surface, but if you are a cancer patient having NHS treatment and a particular drug exists that could help you but that NICE has decided is too expensive, you will probably feel very resentful. Patients in England with advanced kidney cancer were upset by the NICE decision in 2008 that a new drug that could have given them a chance of living longer was too expensive.

Originally, in the late summer of 2008, NICE decided that Sutent was too expensive but the company that makes the drug has since offered to pay for the first treatment round, so offering a cost saving to the NHS. In February, the drug became available on the NHS, significantly later than in other European countries.

Some patients who have opted to pay for drugs not available on the NHS because of delays such as this have been penalised in the past by having their access to NHS treatment withdrawn completely. Many individuals and patient groups have fought against this as being very unfair.

Last year, their efforts were rewarded when the National Clinical Director for Cancer in England, Professor Mike Richards, advised the government that people should be allowed to top up their NHS treatment by paying for drugs not currently available within the NHS system. His report on 'Improving Access to Medicines for NHS Patients' was published in November 2008.

It is now possible for patients who could benefit from expensive drugs that have been approved for use in the UK, but that are not reimbursed by the government, to pay for their own treatment without the rest of their treatment becoming chargeable. The money that patients will contribute to the cost of their treatment is to be called a ‘copayment’.

Patient groups have been pleased with the decision and many believe that people will now opt for ‘top-up’ medical insurance. This will not pay for private healthcare treatments generally but it will provide some funds to pay for drugs for rare conditions.

Professor Richards pointed out very clearly in his report that this decision was not a precedent for charging for other NHS services. Others have argued that this will lead to a two-tier system within the NHS, where treatment is supposed to be freely available to everyone, no matter how much money they have.

Doctors told MPs at the start of 2009 that the new policy was not in line with the original aims of the NHS. Under the new rules, some patients will be able to afford better treatment than others. Opponents of the scheme argue that the government should fund all available drugs that have been shown to be safe and effective, regardless of how much they cost.