Home > Case Studies > I Had Shoulder Op on Private Health: A Case Study 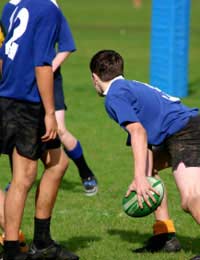 “This is now as far as I can raise my arm but it’s great I no longer have the constant pain,” says Martin as he demonstrates lifting his arm level with his shoulder, just about. 12 months ago Martin had a total shoulder replacement after suffering repeated sports injuries in his earlier days as a semi-professional rugby player.

“I don’t regret doing the sport but in my mid-twenties I was plagued with shoulder pain and stiffness. Joint pain never seems to go away and it sort of burns into your mind. You can’t escape,” recalls Martin.

The shoulder joint is quite a complicated joint to replace, not as easy as the hip and knee replacements that are almost commonplace now. In a healthy shoulder joint, the ball part from the bone of the upper arm fits into the socket formed from the shoulder blade bone. Normally, the ball fits into the socket perfectly and the surfaces are very smooth. Very little friction is possible because the surfaces are coated with cartilage. In Martin’s case, the injuries he received from rugby damaged this cartilage – several times.

“The result was that the two bones began to rub together without any cartilage to protect them. This was like rubbing the bones with a cheese grater, and arthritis formed in the joint. It was agony to move the shoulder and, as many movements actually involved the shoulder joint, I was just always on anti inflammatory drugs and painkillers to try to get through each day,” explains Martin.

Martin had quite a bit of money saved from his days in rugby and, as the pain got worse and his GP was referring him for consultations within the NHS, he actually made the suggestion that Martin could consider private treatment.

“The GP was quite open with me and said if I wanted to get the problem sorted quickly, and I could afford it, I should think about private treatment and possibly a total shoulder replacement,” says Martin.

Martin’s surgeon actually recommended that he go for this option as he had a rotator cuff deficiency. The rotator cuff is a term used to describe the muscles around the shoulder joint, which hold everything in place and enable movement. “My muscles and tendons had been badly damaged by my rugby exploits, so this was the easiest way to replace the joint and it gave me the best chance of having a stable and workable joint afterwards,” says Martin.

The operation went ahead, taking 3 hours. Martin stayed in the private hospital for 3 days before going home and being cared for by his fiancée for two weeks until he got mobile again. Months of physiotherapy followed, some done under the direction of the surgeon and some done in conjunction with a specialist sports injury physiotherapist who was used to working with rugby injuries. “The whole thing set me back about £10 000, including the private physiotherapy, but it was well worth it,” says Martin.

“I have been pain-free for about 6 months now. I get stiffness in the joint sometimes, particularly if I don’t do my exercises very conscientiously. But it’s so much better than before and I can do most of the normal things in life. My works is so much easier, driving is pain free and I am looking forward to getting married in three months time. I can’t raise a pint to my lips – but I just use the other hand,” laughs Martin.