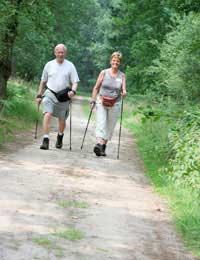 Eileen is a bright and bubbly 55-year old who has just become a grandma for the first time. “I’m so excited – my daughter Emily had a baby boy last weekend and he is adorable,” she says, hardly able to contain herself. “Thanks to my incontinence treatment, I can even jump up and down with happiness if I want to,” she laughs.

A year ago things were very different and Eileen was getting really depressed by the difficulty she was having controlling her bladder. “I became obsessed with stopping for a toilet every time I saw one as I was really worried about having an accident,” she recalls. Eileen has always enjoyed an active life, going fell walking regularly and doing line dancing and ballroom dancing with her husband Geoff.

Just after Eileen’s 53rd birthday, she noticed that the tiny leaks of urine that she had experienced for years if she laughed or coughed were getting worse and it was getting harder to control. “I had laughed with other women of my age that we could never go on our teenage children’s trampolines – that was a disaster! But one day I reached down to pick something off a lower shelf in the supermarket and the worst happened. I thought I would die of embarrassment,” says Eileen. After that, the fell walking, dancing and even shopping were no go areas for Eileen who became a virtual recluse. “I did start to wear those awful incontinence pads but it just made me sit and cry – I knew I couldn’t carry on like this.”

Fortunately, Geoff had private medical insurance through his job as a manager in a car manufacturing plant and this also covered Eileen. Realising how upset she was by her stress incontinence, Geoff suggested that they consult a private doctor about the problem, through his employer’s scheme. “Incontinence is not a life threatening condition and although there are treatments available on the NHS, getting an appointment and then the treatment can take a few months. I didn’t want our lives to be disrupted for that long,” says Geoff.

The appointment at the local private hospital was arranged within a week. “The consultant said I had a very common problem and there was a treatment that could help – but it involved surgery. I was worried at first, but then he explained it was a keyhole type of surgery through the vagina, and was a relatively minor operation,” says Eileen.

Stress incontinence is a problem that affects many middle aged women, particularly if they have had several children. If pelvic floor exercises can’t help, surgery to support the urethra and muscles with tension-free vaginal tape is a very successful treatment.

Eileen’s operation has been perfected on thousands of women and involves inserting a piece of tape to form a sling to support the muscles and urethra to restore full bladder control. She was scheduled for surgery 2 weeks later for the 30 minute procedure. “I had an epidural for the surgery so was aware of everything that was taking place and all was explained to me in great detail,” she says. Tiny cuts were made in her vagina and the tape was then placed through the cuts into her body, just under the mid section of the urethra. The tape is pulled through but not tight – it tightens as connective tissue forms around it as healing takes place.

After a one night stay in hospital, Eileen was allowed to go home and rest for two weeks. “After about 10 days, I felt fine. I was told that my stress incontinence should resolve more or less straight away and I was amazed that it did. Now I can go anywhere and do anything, and I don’t have to worry. Best of all, no more incontinence pads, which is brilliant,” smiles Eileen.